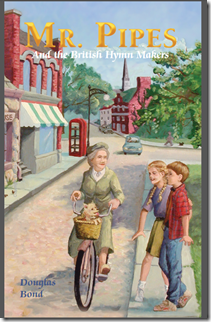 Mr. Pipes and the British Hymn Makers, by Douglas Bond, is the first book in a series of four written to teach children about traditional hymns. This novel tells the story of two children who visit England and meet an elderly man who teaches them about many of the famous British Hymn writers, including Thomas Ken, Isaac Watts, John and Charles Wesley, and John Newton. Each chapter closes with words and music for one or more hymns by the featured author.

In addition to teaching about hymns, another stated purpose is to  help young people “cultivate an attitude of humble adoration as they approach their maker” and to realize their connections with the universal church.

This would make a nice read-aloud for younger children. Emily and I each read it to ourselves, then discussed the material briefly before we played and sang the hymns for each author at the piano. She seemed to enjoy the book (as evidenced by the fact that she kept disappearing to read it instead of doing her other schoolwork!)

What we liked: This was an enjoyable story. The reader is introduced to British culture and customs as well as hymn writers. Emily and I both learned a lot about the history of many common hymns. Since our church service uses mostly contemporary music, I think this introduction to more traditional church music was very good for Emily. The drawings were beautiful and reminded me of older classic books from the 50’s.

What we didn’t like as much: I really didn’t think the book was very well written. Although it was still worth reading because of the content, the descriptions and dialogue often seemed stilted,  unnatural, and outdated. The little boy was frantic over losing his “Discman?!” The narrative didn’t always match the illustrations. For example, a London subway station was described as populated with young men with “green mohawks” and piercings. Yet the illustration showed a crowd of people in very old fashioned clothing—women all wearing dresses, and girls in braids. Emily commented that the mother who brought the children to England was seldom even mentioned after the first chapter. (She did briefly reappear late in the book to comment that she didn’t like the “dirges” the children were learning and preferred the “ditties” the children had learned when visiting a church with friends in the US.) The two children wandered around this little town unsupervised other than by Mr. Pipes, whom they had just met.  Their attitudes in the first chapter were unkind and critical of each other and of people and things around them.

Also, there was a bias running throughout the book against modern worship styles and contemporary worship music. To quote: “musical entertainers write most of what passes for worship music today. For the most part, these musicians lack a deep, theological understanding of Biblical truth, and often lack literary training and poetic skill. Finally, most contemporary music written by Christians just mimics the world’s way, and thus, it is so eminently forgettable…”  This may sometimes be true, but I personally disagree strongly with this blanket statement. 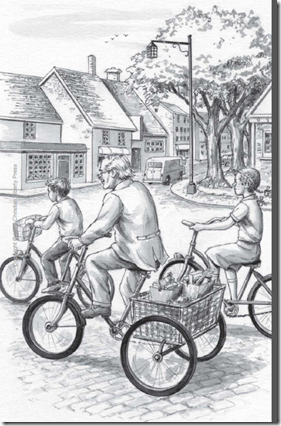 The pdf version of the book sells for $8.79 and the print version for $9.89. I received the pdf version, which converted very nicely to Kindle format.  The suggested grade level is 7th-10 grades, although I would consider it to be a 3rd-6th grade interest level. It is published by Christian Liberty Press.

Disclaimer: As a member of the TOS Crew, I received  this book  free in order to write this review. All opinions are my own.