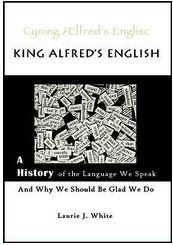 A couple of months ago, Emily told me that she wanted to “learn about where words came from.” Shortly afterward, I was given the opportunity to review King Alfred’s English, A History of the Language We Speak and Why We Should Be Glad We Do.  How perfect!
King Alfred’s English is a fascinating account of English history from pre-Roman Empire days to the present. The chapters on the Reformation are particularly thorough. Woven into the historical account are the origins of our present day language. I already know that English drew from the Germanic, Latin, and Greek languages, but I never really knew how it came about until I read this book. Here are just a few things I learned:
I highly recommend this book! It is very interesting, well-written, and focuses on a subject that I haven’t seen addressed elsewhere. Not only did I find the information about the origins of our language fascinating, but I was able to fill in some gaps in my history knowledge. It would be an excellent supplement to any curriculum, or a just a fun book to read.
King Alfred’s English is written for middle schoolers and up, although I think some younger children might enjoy it as well. Emily has read and enjoyed the first two chapters so far and I intend to have her read the rest throughout our school year as the chapters correspond with our world history studies. The website includes additional student and teacher materials, including articles, videos, and images, and worksheets and tests, allowing the book to be used as the core for an even more thorough study of the topic.
King Alfred’s English may be purchased at Rainbow Resource for $14.95, CBD for $14.89, or Amazon (print or Kindle versions).  Interested in buying now? I have a few discount codes to buy the (print) book for 50% off list price ($8.47).  Leave a comment with your email by Aug. 16  if you’d like one. First 3 comments only!
“Like”  King Alfred’s English Facebook page to read more interesting tidbits about our language.
Disclaimer: As a member of the TOS Crew, I received  this book  free in order to write this review. All opinions are my own.