They Say We Are Infidels (Review) 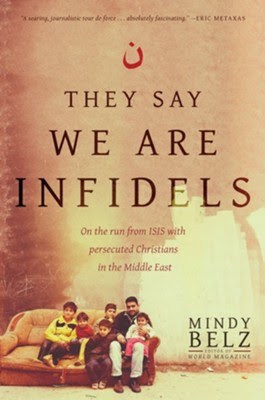 They Say We Are Infidels, by Mindy Belz offers a close-up look at the persecution of Christians in the Middle East and the rise of Isis. Belz has been a foreign correspondent for World magazine for over 25 years, so she has a first hand look at the tensions in the Middle East. This book shares her experiences visiting Iraq and Syria from shortly after 9/11 to the present.

When Belz visited Iraq and Syria, she didn’t stay in the safe zones as many reporters do. She traveled from city to city, meeting with and staying with Christians in different areas and learning about their experiences. She describes life under Saddam Hussein, the hope and increased freedom in the midst of the material devastation after the Iraq war, then the increasing persecution and attacks on Christians as radical Islamists pushed their way into power in the new government.

Personally, I have never had a good grasp of Middle East conflict. Mainstream news covers the conflicts, but recently, I’ve been wondering about the causes of these conflicts, the extent of Muslim hatred toward Christians and the West and whether there are any solutions toward peace in our time. I was surprised by what I learned. Although we don’t hear much about Christians who live in the Middle East, this area was the birthplace of Christianity and there are still churches that date back to well before Islam began. Ten years ago, the Iraqi population was 10% Christian, although that number is rapidly approaching zero because of ISIS’ goal of creating a pure Islamic state. Many of the Christians who have been forced to leave simply wanted to live in their homeland side by side with their moderate Muslim neighbors. It was heartbreaking to read about the devastation that non-Muslims have faced and about the role the U.S. had in this by removing Saddam Hussein and the Baathist government, but failing to put forth the leadership that might have prevented ISIS and other radical Islamists from filling the vacuum. I can’t say that this was a hope-filled book, but it gave me a vivid picture of the situation. Education is the first step in effecting change.

They Say We Are Infidels is a “must-read” for anyone who wants to learn more about Islam, ISIS, and the Middle East. I will definitely be sharing my copy with family and friends.

I received a free copy of these book from Tyndale House Publishers in exchange for my honest review. All opinions are my own.

Email ThisBlogThis!Share to TwitterShare to FacebookShare to Pinterest
Labels: Reviews