Many homeschool subjects can be learned well from books, but foreign language (other than “dead” languages such as Latin) is an area that requires both audio content and interaction for a student to attain mastery. It’s also an area in which parents are of limited help if they are not themselves fluent in the target languages. I recently became acquainted with the Middlebury Interactive Language courses, an online option for language courses.

Middlebury Interactive Languages courses are available in Spanish, French, Chinese, and German for grades K-12 (depending on the language). Emily is taking the High School Level 1 Spanish Course.

Middlebury Spanish I offers daily lessons, each requiring about 30 minutes to complete. The student progresses through a series of slides, each offering a different activity. Emily was required to: 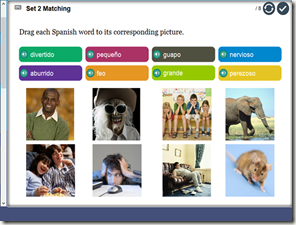 The activities are varied and fun, which keeps the student’s interest high. As each activity is completed, the image of the slide at the left side of the screen turns gray as a visual depiction of progress. Some activities simply need to be completed, such as listening to (and hopefully repeating) a list of vocabulary words or reading and listening to an explanation of a concept. Others are graded, such as matching and fill-in-the-blank activities. We were pleased to find that if the student does poorly on an activity, it can be redone until it is perfect. This ensures that the student is mastering each skill before she progresses. 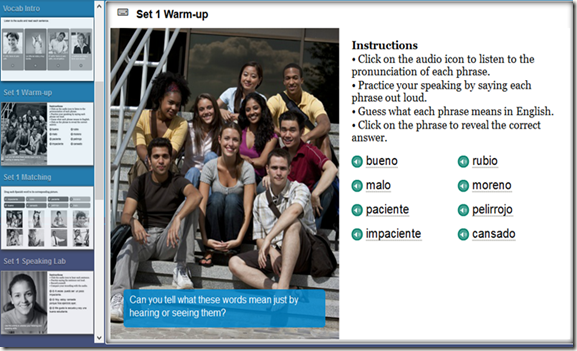 I was concerned that the course would be too easy for Emily because she has had experience with several other Spanish programs. I didn’t think she was ready for Spanish 2, though. Fortunately, this was not the case. Middlebury Interactive Spanish 1 starts with letters of the alphabet, basic greetings, basic nouns and adjectives like most other programs. However, there was quite a bit of conversation even in the first lessons. The expectation was that the beginning student could pick out a few words and get the gist of the conversation. Emily could actually understand nearly all of the conversation, so the activity was just at a higher level for her as she attempted to grasp all the language. 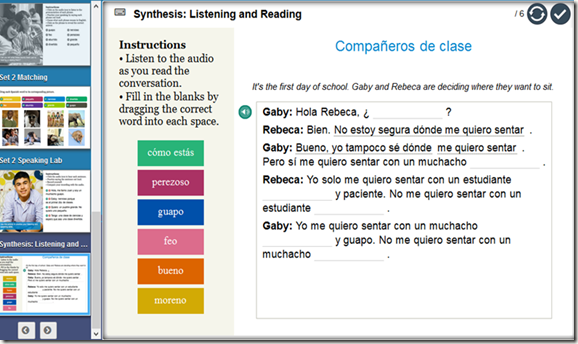 Emily is really enjoying this online Spanish course, and I think she’s learning a lot. It uses a typical scope and sequence for high school courses, so it’s a good option for students who have had Spanish in a classroom setting or may in the future. It’s also a good supplement to more travel oriented or conversational courses that may leave out some of the basic concepts, such as memorizing verb conjugations that are a part of traditional courses.

Emily says that she loves using Middlebury Spanish and wants to continue with it. She said that she liked that when vocabulary was taught, she was immediately quizzed on it, then quizzed again later. She also enjoyed the conversations in each lesson.

My only suggestion is actually not about the course; it is about the Middlebury website. It was very hard for me to get a grasp from the website of what the course would be like until we actually tried it. It would be very helpful for potential customers to try out a lesson for free or to see screenshots of each course as well as seeing a scope and sequence for the course. It’s a wonderful course, but it is difficult for a potential customer to see that.

Middlebury Interactive Language high school courses are $119 per semester without teacher. Teacher support is an additional $179.