Common Core—A Path to Excellence? Or Not? 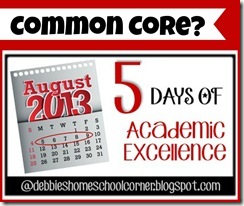 Adoption of the Common Core standards by most states has been big news during the past few months. It may be changing the future of education, certainly in public schools, but will also have an effect on students in private or home schools.

My concerns pertaining to public schools:

I like the idea of accountability in public schools. We all know that some public schools yield good results (at least in academics) while others are dismal failures. I firmly believe that good teaching should be rewarded and poor teaching should not. Children deserve to be challenged and provided with the tools to succeed. Logically, there should be goals or standards to aim for.

Having standards in place sounds like a good idea, especially for those schools that are not producing educated students. However, I don’t like the idea of a large bureaucracy setting the standards for children throughout the country. Committees that set educational goals for students have too much power to insert a political or social agenda into these standards, thereby controlling the minds of the next generation. Some of the standards are ridiculous—informational reading replacing the reading of literature in English classes? That policy is designed to produce compliant workers, not thinkers. One of the supposed goals of the Common Core standards is to make Americans competitive with students in other countries. However, the big advantage that the U.S. has always had is our creativity and inventiveness. Reading only informational texts will squelch that. It will also give schools the opportunity to indoctrinate students with particular political or (anti) religious views.

I was initially in favor of the “No Child Left Behind” act, but I have not seen good results from it. In our local schools, there has been increasing emphasis on “teaching to the test.” Children earning high scores is the focus of school now. In elementary schools, little or no history or science is taught anymore because the tests focus on math and reading, making science and history obsolete. Children spend several weeks (not days) taking tests in the spring, losing instructional time. I foresee this increasing as schools adapt to the new Common Core standards.  Much of what I’ve read of the standards sounds like educational gibberish anyway and will be difficult to test.

My biggest concern, however, is that there is a huge profit to be made in the implementation of these standards. The same companies (Pearson being the largest) are producing curriculum, producing and marketing Common Core tests and providing teaching training. So who is really determining what our children will be taught? Not parents, not teachers, not principals, but for-profit publishers! Even the ACT and SAT college admissions tests will be adapting to the Common Core standards. There may not be a “federal curriculum,” but you can be sure that school systems will be choosing the curriculum that teaches what’s on the test, making all curricula choices pretty much the same.

My concerns pertaining to home schools:

My biggest concern right now is testing. Many homeschool families are required to or choose to do achievement testing. Any college-bound student will need to take the ACT and/or the SAT. If these are changed to fit the Common Core standards, then homeschoolers will be forced to follow these standards if they want their children to perform well, even if they prefer to cover different content matter or disagree with the political and social views that are incorporated into public school curriculum.

Am I panicking? No. There has always been the latest bandwagon to jump on, especially in the educational establishment. I’m not convinced that this will be wonderful for our nation’s children, but who knows? Maybe some good will come from it, especially in poorer schools. Or maybe it won’t make much difference either way. I think that good teachers will continue teaching as they always have. As far as I’m concerned, I am thankful that I have many options for curriculum and will not be forced to use a “state curriculum.”

Click the Crew Blog Hop button below to read more homeschooling posts on topics from Creative Organizing to Charlotte Mason! 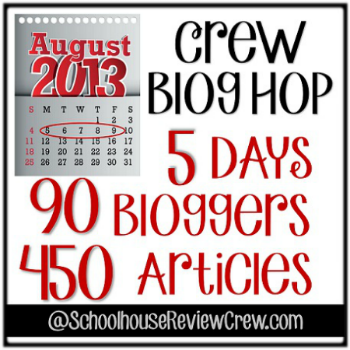